Mobile devices share some architectural similarities with their desktop counterparts, but there are significant distinctions between personal computers and these portable information systems. In addition to cellular functionality, including a number of radios, modern smartphones and tablets typically include a full suite of environmental sensors, cryptographic processors, and multiple wireless and wired communication methods. They also include a touch screen, audio interface, one or more high definition (HD) video cameras, and in odd edge cases unusual capabilities like video projectors.

The figure below illustrates the mobile device technology stack, described in additional detail further below. 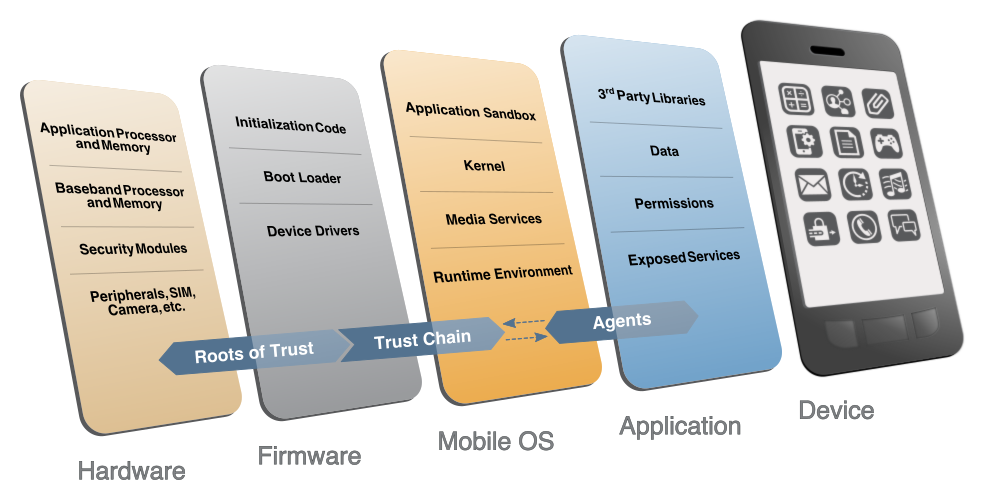 The firmware necessary to boot the mobile OS (i.e., bootloader) may verify additional device initialization code, device drivers used for peripherals, and portions of the mobile OS – all before a user can use the device. If the initialization code is modified or tampered with in some manner, the device may not properly function. Many modern mobile devices contain an isolated execution environment, which are used specifically for security-critical functions. For example, these environments may be used for sensitive cryptographic operations, to verify integrity, or to support Digital Rights Management. These environments typically have access to some amount of secure storage which is only accessible within that environment.