The following is an excerpt from the SP 1500-103 V1 specification. It contains the specification’s executive summary and class documentation.

The complete publication including JSON and XML schemas is available free of charge from:

This document presents an interoperable, common data format specification for cast vote records (CVR), which are produced by vote-capture devices such as ballot scanners. A CVR is an electronic record of a voter’s selections, with usually one CVR created per sheet (page) of a ballot. Election results are produced by tabulating the collection of CVRs, and audits can be done by comparisons of the paper ballots or paper records of voter selections against the CVRs.

This specification supports three general use cases for CVRs:

The purpose of this specification is to provide an interoperable, non-proprietary data exchange format in JavaScript Object Notation (JSON) and eXtensible Markup Language (XML) for CVRs so as to promote greater transparency to voting records produced by vote-capture devices, and to facilitate the exchange of CVRs with other devices that operate upon CVRs regardless of device manufacturer.

There are many complex operations performed by voting devices when voters submit their paper ballots to be scanned. These operations are mostly invisible to voters but are necessary to determine whether contest selections have been marked adequately and whether voter intent is reflected by what is marked on the ballot. This specification includes the necessary detail to capture these operations so that CVRs can be better audited and adjudicated as necessary to include write-in candidates or other issues.

This specification is geared towards the following audiences:

To identify the version of the CVR specification being used, i.e., version 1.0.0. This will need to be updated for different versions of the specification.

Used in CVRContestSelection::Status to identify the status of a contest selection in the CVR.

Used in CVRContest::Status to identify the status of a contest in which contest selection(s) were made.

Used in CVRSnapshot::Status to identify the status of the CVR.

Used in CVRSnapshot::Type to indicate the type of snapshot.

Used in Hash::Type to indicate the type of hash being used for an image file.

Used in Code::Type to indicate the type of code/identifier being used.

Used in SelectionPosition::HasIndication to identify whether a selection indication is present.

Used in SelectionPosition::Status to identify the status of a selection indication.

Used in GpUnit::Type to indicate a type of political geography.

Used in CastVoteRecordReport::ReportType to indicate the type of the CVR report.

Used in Contest::VoteVariation to indicate the vote variation (vote method) used to tabulate the contest.

Annotation is used to record annotations made by one or more adjudicators. CVRSnapshot includes Annotation.

BallotMeasureContest is a subclass of Contest and is used to identify the type of contest as involving one or more ballot measures. It inherits attributes from Contest.

BallotMeasureSelection is a subclass of ContestSelection and is used for ballot measures. The voter’s selected response to the contest selection (e.g., “yes” or “no”) may be in English or other languages as utilized on the voter’s ballot.

CandidateContest is a subclass of Contest and is used to identify the type of contest as involving one or more candidates. It inherits attributes from Contest.

CandidateSelection is a subclass of ContestSelection and is used for candidates, including for write-in candidates.

The root class/element; attributes pertain to the status and format of the report and when created.

CastVoteRecordReport includes multiple instances of CVR, one per CVR or sheet of a multi-page cast vote record. CastVoteRecordReport also includes multiple instances of Contest, typically only for those contests that were voted so as to reduce file size. The Contest instances are later referenced by other classes to link them to contest options that were voted and the indication(s)/mark(s) made.

Code is used in Election, GpUnit, Contest, Candidate, and Party to identify an associated code as well as the type of code.

Contest has three subclasses, each used for a specific type of contest:   These subclasses inherit Contest’s attributes.

ContestSelection has three subclasses, each used for a specific type of contest selection:

ContestSelection contains one attribute, Code, that can be used to identify the contest selection and thereby eliminate the need to identify it using the subclasses. 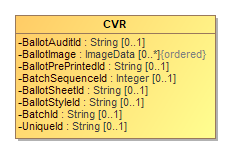 CVR constitutes a cast vote record, generated by a ballot scanning device, containing indications of contests and contest options chosen by the voter, as well as other information for auditing and annotation purposes. Each sheet of a multi-page paper ballot is represented by an individual CVR, e.g., if all sheets of a 5-sheet ballot are scanned, 5 CVRs will be created. CastVoteRecordReport includes multiple instances of CVR as applicable.

CVRSnapshot can also include CVRContest for every contest on the ballot regardless of whether any of the contest options contain an indication, for cases where the CVR must include all contests that appeared on the ballot.

CVRContest attributes are for including summary information about the contest.

CVRSnapshot contains a version of the contest selections for a CVR; there can be multiple versions of CVRSnapshot within the same CVR. Type specifies the type of the snapshot, i.e., whether interpreted by the scanner according to contest rules, modified as a result of adjudication, or the original, that is, the version initially scanned before contest rules are applied. CVR includes CVRSnapshot.

Other attributes are repeated in each CVRSnapshot because they may differ across snapshots, e.g., the contests could be different as well as other status.

CVRWriteIn is used when the contest selection is a write-in. It has attributes for the image or text of the write-in.

Election defines instances of the Contest and Candidate classes so that they can be later referenced in CVR classes. Election includes an instance of Contest for each contest in the election and includes an instance of Candidate for each candidate. This is done to utilize file sizes more efficiently; otherwise each CVR would need to define these instances separately and much duplication would occur.

Used for identifying a geographical unit for various purposes, including:

Hash is used to specify a hash associated with a file such as an image file of a scanned ballot.

Used by File for a file containing an image, e.g., an image of a write-in on a paper ballot.

ImageData is used to specify an image file such as for a write-in or the entire ballot.  It works with several other classes, as follows:

Party is used for describing information about a political party associated with the voter’s ballot. CVR includes instances of Party as needed, e.g., for a CVR corresponding to a ballot in a partisan primary, and CandidateContest references Party as needed to link a candidate to their political party.

PartyContest is a subclass of Contest and is used to identify the type of contest as involving a straight party selection. It inherits attributes from Contest.

PartySelection is a subclass of ContestSelection and is used typically for a contest selection in a straight-party contest. 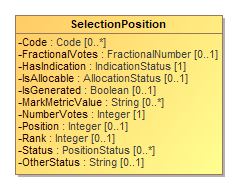 SelectionPosition contains additional information about the mark to specify whether the indication/mark is allocable, as well as information needed for certain voting methods.